Practical Demonkeeping: A Comedy of Horrors (1992) is the first novel by Christopher Moore.

In Christopher Moores ingenious debut novel, we meet one of the most memorably mismatched pairs in the annals of literature. The good-looking one is one-hundred-year-old ex-seminarian and "roads" scholar Travis OHearn. The green one is Catch, a demon with a nasty habit of eating most of the people he meets. Behind the fake Tudor façade of Pine Cove, California, Catch sees a four-star buffet. Travis, on the other hand, thinks he sees a way of ridding himself of his toothy traveling companion. The winos, neo-pagans, and deadbeat Lotharios of Pine Cove, meanwhile, have other ideas. And none of them is quite prepared when all hell breaks loose.

Travis was born in 1900, yet he has not aged since 1916, because he accidentally called up a demon from hell named Catch as his servant, presumably forever. Ever since then, Travis has been trying to get rid of Catch, but is unable to do so because he has lost the repository of the necessary incantations. He traces their whereabouts to a fictional town called Pine Cove, along Big Sur coast, where he thinks the woman he gave them to may be residing. Interactions with the townspeople and with a djinn, who is pursuing Catch, create considerable complications. 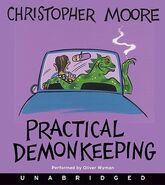 1993 Spanish Paperback
Add a photo to this gallery

Retrieved from "https://chrismoore.fandom.com/wiki/Practical_Demonkeeping?oldid=3946"
Community content is available under CC-BY-SA unless otherwise noted.